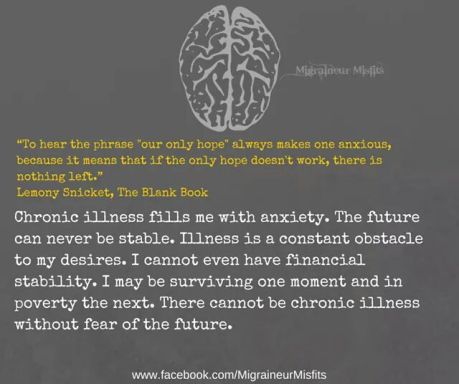 Many Symptoms of Migraine

By Kerrie Smyres – January 30, 2012
Pure pain best describes the migraines I’ve had this week. My entire head, including the roof of my mouth, throbs in time with my heartbeat. I hear blood whooshing in my ears.

They demand my attention for hours until, if I’m fortunate, two Midrin let me sleep. When I awake my head is usually still throbbing.

Those who have never had a migraine tend to think of it as a raging headache. While sympathetic folks may understand that the pain is awful, even they don’t realize that a migraine is not only a headache. While it is certainly a major aspect, pain is one of many symptoms of migraine. Personally, pain was a primary concern until I started taking indomethacin last June. Nausea, dizziness and fatigue were often present, but were overshadowed by the pounding. Now, indomethacin generally controls the pain well enough that I’ve been able to see just how debilitating the other symptoms are.

This recent bout with high pain levels has me thinking about how misunderstood migraine is by the general public and even by migraineurs and health care professionals. The pain is a big deal, but it is only a small part of this neurological disorder that impacts the entire body. Migraine: The Complete Guide, a book published by the American Headache Society in 1994, has the most comprehensive list I’ve found. Though the book is old and no longer available this list is invaluable.

Visual Aura (before the pain begins)

a bright shape that spreads across the visual field of one eye and appears to block some or all of the vision; can be seen whether the eye is open or closed
flashes of light and color
wavy lines
geometric patterns
blurred vision
partial loss of sight
Sensory

numbness or tingling on the face or upper extremities
a sense that limbs are a distorted shape or size
heightened sensitivity to light, sound, and smells
smelling odors that aren’t actually present (like natural gas or something burning)
skin sensitivity and intolerance of being touched (allodynia)
Motor

changes in blood chemistry
changes in blood pressure
blood vessel dilation
difficulty regulating temperature
changes in heart rhythms
Though quite detailed, this list is by no means complete. I can add dizziness and trembling. What about you? Which of these symptoms do you have? Do you have other symptoms not listed here?

NOTE FROM JUDI – Since I hear at least once or twice a week “it’s only a headache!” (Cue music from “Psycho!”) This article bears posting over and over again! Thanks Kerrie! Much love! 💕